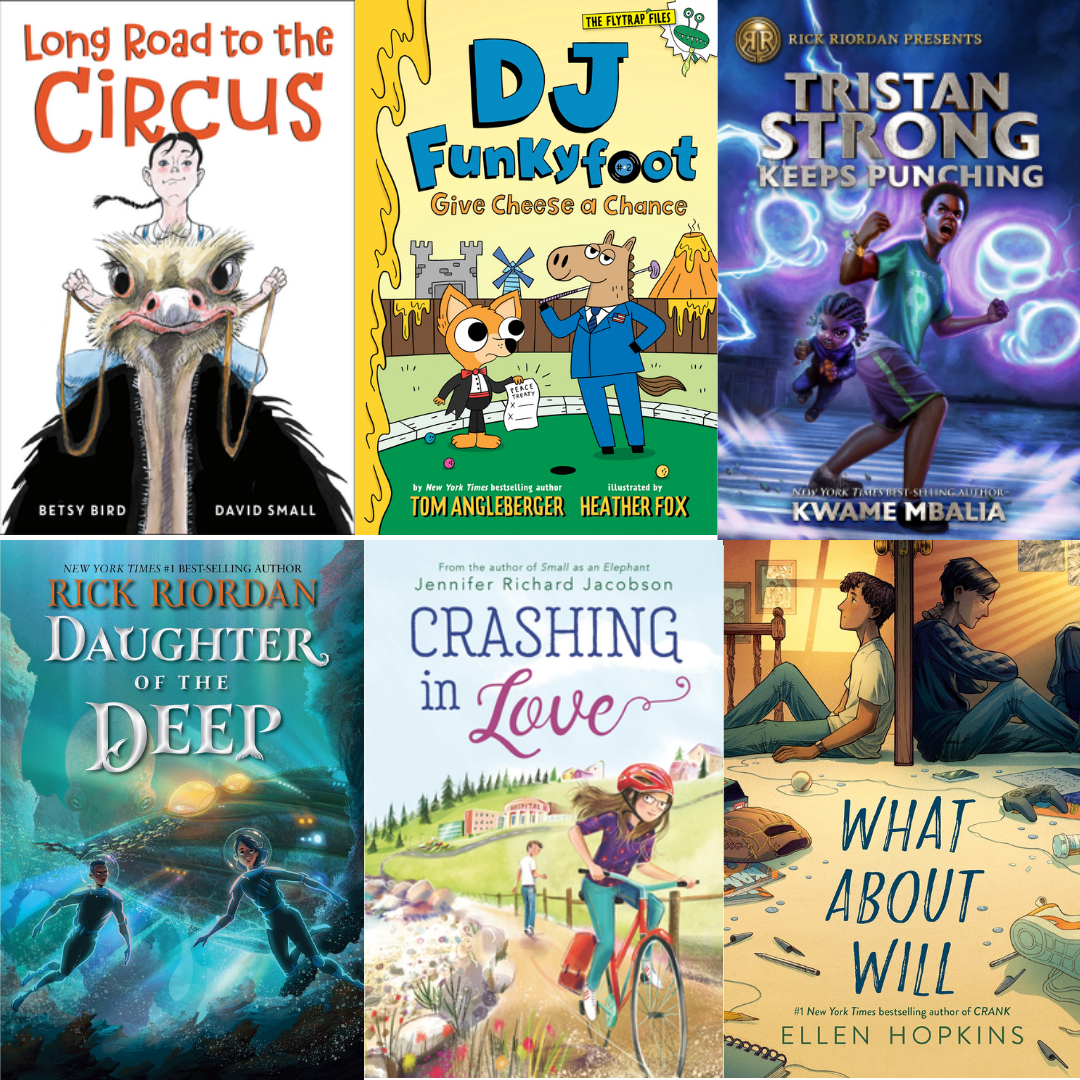 Crashing in Love by Jennifer Jacobson.  Upon finding a boy unconscious in the middle of the road, 12-year-old Peyton feels destiny has brought them together and is determined to nurse him back to health. Gr 4-7

Long Road to the Circus by Betsy Bird.  Illustrated by David Small.  A spirited historical adventure set in 1920, involving traveling entertainers, the desire to leave the farm and ostrich riding!  Reminiscent of Richard Peck’s stories. Gr 4-6.

The Last Cuentista by Donna Barba Higuera.  Escaping from Earth before it is hit by Haley’s Comet, Petra, her family and other “chosen ones” survive hundreds of years of suspended animation to awaken with no memories – all except Petra.  If you liked The Giver by Lois Lowry …  Gr 5+.

The Robber Girl by Franny Billingsly.  A girl raised by a thieving gang in the old west is taken in by a judge who shares his daughter’s magical dollhouse.  Robber Girl’s best friend/alter ego is Dagger (a real knife she always keeps with her), who warns her against being tamed.  Gr 6-9.

The Interplanetary Expedition of Mars Patel by Sheela Chari.   Space-obsessed preteen Mars Patel heads to Mars in this companion novel to The Unexplainable Disappearance of Mars Patel.  Gr 5-8.

What About Will by Ellen Hopkins.  A novel in verse.  Afraid of further fracturing his family, 12-year-old Trace Reynolds covers for his older brother, who is recovering from a tragic accident and now addicted to pain medicine.  Gr 5-8.

Just In!  New arrivals since my book talk.

One Smart Sheep by Gary D. Schmidt.  It takes one smart sheep to escape from a piano movers’ van and find his way home in this humorous friendship story.  Full-color illustrations throughout.  Gr 2-4.

Out of My Heart by Sharon Draper.  Follow-up to the popular Out of My Mind has Melody trying to find a summer camp for differently-abled kids like her.  Gr 4-7.

Daughter of the Deep by Rick Riordan.  Rick Riordan pays homage to Jules Verne in his exciting modern take on 20,000 Leagues Under the Sea.  Gr 5+.

Dragonwatch: Return of the Dragon Slayers by Brandon Mull.  In the fifth and final installment of Dragonwatch, the Dragon King, Celebrant, has united the dragons into a vengeful army, and only a final artifact stands in the way of them unleashing their fury against humankind.  Gr 4-7.