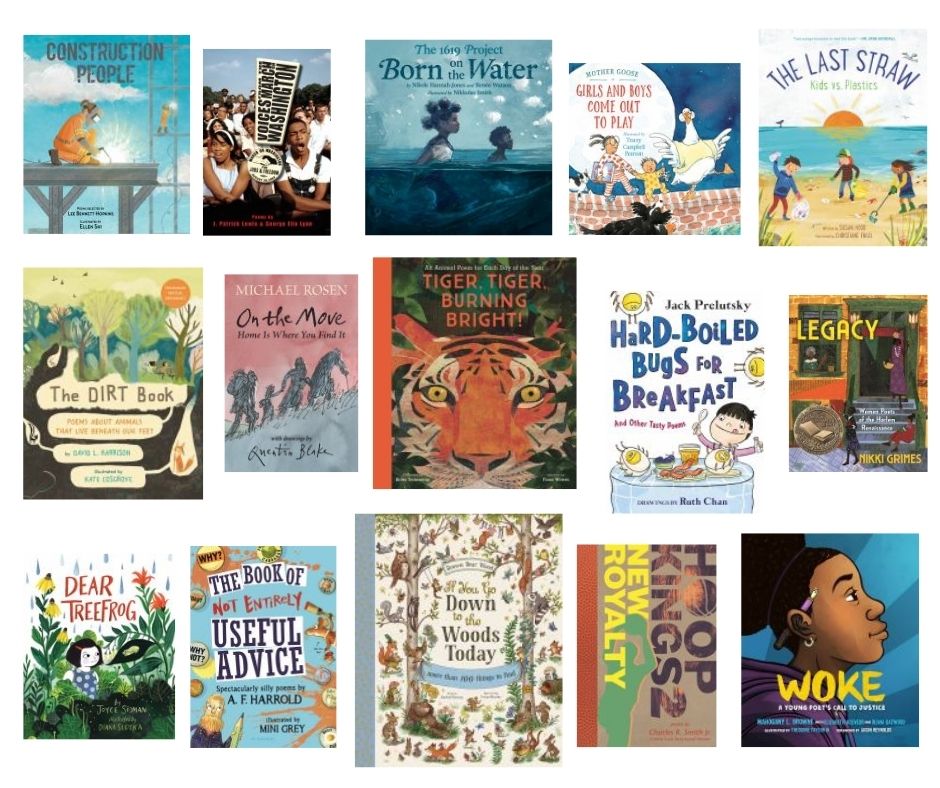 Celebrate National Poetry Month by checking out some of these great books!

Fourteen poems compiled by award-winning poet and anthologist Lee Bennett Hopkins introduce readers to the various construction people who collaborate to create a high-rise hotel building, from architect to crane operator to glaziers and more.

Capturing the joy of finding a kindred spirit, this stunning picture book by Newbery Honor-winning poet Joyce Sidman tells the story of a lonely girl moving into a new home and the little treefrog that helps her connect to the beautiful world around her.

The Dirt Book: Poems About Animals that Live Beneath Our Feet by David L. Harrison, illustrated by Kate Cosgrove

A collection of poems about dirt and the many organisms that live there such as grubs, trapdoor spiders, moles, earthworms, chipmunks, and doodlebugs.

Girls and Boys Come Out to Play, illustrated by Tracey Campbell Pearson

Parents looking for bedtime stories with a fresh twist on a familiar nursery rhyme need look no further. Using the popular Girls and Boys Come Out to Play Mother Goose poem as a backdrop, illustrator Tracey Campbell Pearson spins an exciting visual narrative in which Mother Goose invites children on a city block to come out and play, taking them on a moonlit adventure in verse.

If You Go Down to the Woods Today, poems by Rachel Piercey, illustrated by Freya Hartas

Experience the everyday wonder of nature in this first book of poetry, exploring a magical woodland year. With poems by acclaimed writer Rachel Piercey, join Bear on his journey from spring to winter with lots of friends to meet, places to explore, and things to spot along the way.

There's no doubt about it--plastic is in almost everything. From our phones and computers to our toys and utensils, plastic is everywhere. But the amount of plastic we throw away is hurting the health of our planet. With The Last Straw: Kids vs. Plastics, readers will be fascinated as they learn about the growing plastic problem and meet just a few of the young activists who are standing up and speaking out for change.

The 1619 Project Born on the Water by Nikole Hannah-Jones and Renee Watson, illustrated by Nikkolas Smith

A young student receives a family tree assignment in school, but she can only trace back three generations. Grandma gathers the whole family, and the student learns that 400 years ago, in 1619, their ancestors were stolen and brought to America by white slave traders. But before that, they had a home, a land, a language. She learns how the people said to be born on the water survived.

The Book of Not Entirely Useful Advice, poems by A.F. Harrold, illustrated by Mini Grey

Packed with silly rhymes and witty wordplay, A.F. Harrold's poetry is positively bursting with fun--and advice. But it's not always the most useful. . . Among the seemingly nonsensical stanzas on onions, sausages, and kilted koalas, are exercises in critical thinking--what advice should readers follow, and what should they dismiss?

Hard-Boiled Bugs for Breakfast and Other Tasty Poems by Jack Prelutsky, illustrated by Ruth Chan

More than 100 funny new poems from Jack Prelutsky, the nation's first children's poet laureate, in a wide array of poetic forms, from haiku to concrete poems and everything in between, and hilariously illustrated in black-and-white on every page.

What's your game? Can you fly like Blake Griffin? Are you a lightning-fast force of nature like Russell Westbrook? Or are you a chameleon on the court, racking up nicknames like Steph Curry? From James Harden with his shimmy-shake-spin to "Lord of the Leap, Sir Alley of the Oop" Lebron James, here are a dozen profiles honoring the superb talents and skills of some of the best players in NBA basketball.

Legacy: Women Poets of the Harlem Renaissance by Nikki Grimes

For centuries, accomplished women, of all races, have fallen out of the historical records. The same is true for gifted, prolific, women poets of the Harlem Renaissance who are little known, especially as compared to their male counterparts. In this poetry collection, bestselling author Nikki Grimes uses "The Golden Shovel" poetic method to create wholly original poems based on the works of these groundbreaking women--and to introduce readers to their work.

On the Move: Home Is Where You Find It by Michael Rosen, with drawings by Quentin Blake

In a companion book to The Missing: The True Story of My Family in World War II, Michael Rosen has brought together forty-nine of his most powerful poems, exploring the themes of migration and displacement through the lens of his childhood in the shadow of World War II, the lives of his relatives during that war, and migration, refugees, and displacement today and tomorrow, here, there, and everywhere.

Tiger, Tiger, Burning Bright! is a lavishly illustrated collection of 366 animal poems--one for every day of the year. Filled with favorites and new discoveries written by a wide variety of poets, including William Blake, Christina Rosetti, Carl Sandburg, Grace Nichols, Matsuo Basho, Virginia Driving Hawk Sneve, Lewis Carroll, Emily Dickinson, and many more. This is the perfect book for children (and grown-ups!) to share at the beginning or end of the day.

Voices from the March on Washington, poems by Patrick Lewis & George Ella Lyon

The powerful poems in this poignant collection weave together multiple voices to tell the story of the March on Washington, DC, in 1963. As the characters tell their personal stories of this historic day, their chorus plunges readers into the experience of being at the march--walking shoulder-to-shoulder with strangers, hearing Martin Luther King Jr.'s famous speech, heading home inspired.

Historically poets have been on the forefront of social movements. Woke is a collection of poems by women that reflects the joy and passion in the fight for social justice, tackling topics from discrimination to empathy, and acceptance to speaking out.