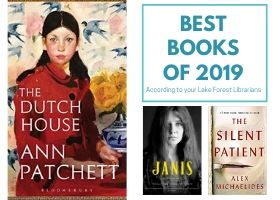 Your librarians have curated a collection of their favorite books published this year and we thought we should share it with the world! Did you read any of these? Did we miss any amazing titles? Click on the title to place a hold on that book in our catalog.

The Most Fun We Ever Had by Claire Lombardo | FICTION LOMBARDO

A multigenerational novel in which the four adult daughters of a Chicago couple--still madly in love after forty years--recklessly ignite old rivalries until a long-buried secret threatens to shatter the lives they've built.

Based on true events, Whitehead tells the story of two boys sentenced to a hellish reform school in Jim Crow-era Florida.

All this Could Be Yours by Jami Attenberg | FICTION ATTENBERG

Victor Tuchman was a jerk. He was a lousy husband and an absentee father which was probably a good thing.  His wife Barbara adored him, his children, daughter Alex and son Gary did not. He now lays dying in the hospital the victim of a heart attack. Will this bring his family together or tear it further apart? This is an appealing, warped and sympathetic look at a dysfunctional family.

In a small town in Maine, recently widowed Evvie Drake rarely leaves her house. When former major-league pitcher, Dean Tenney, moves in to her spare apartment after a case of the "yips", the two form an unexpected friendship that turns into more, but first they have to wrestle a few demons.

Two sibilings are left with only their father and the mansion they live in when their mom leaves them at a young age. They have to rely on each other for everything throughout their lives.

A profoundly moving novel about two neighboring families in a suburban town, the bond between their children, a tragedy that reverberates over four decades, the daily intimacies of marriage, and the power of forgiveness.

Althea, the eldest sister of 4 and substitute matriarch, is a force to be reckoned with and her younger sisters have alternately appreciated and chafed at her strong will. They are as stunned as the rest of the small community when she and her husband Proctor are arrested, and in a heartbeat, the family goes from one of the most respected in town to utter disgrace. As Althea awaits her fate, Lillian and Viola must come together in the house they grew up in to care for their sister’s teenage daughters.

Brisbane, 1983: A lost father, a mute brother, a mum in jail, a heroin dealer for a stepfather and a notorious criminal for a babysitter. It's not as if Eli's life isn't complicated enough already. He's just trying to follow his heart, learning what it takes to be a good man, but life just keeps throwing obstacles in the way - not least of which is Tytus Broz, legendary Brisbane drug dealer. But if Eli's life is about to get a whole lot more serious. He's about to fall in love. And, oh yeah, he has to break into Boggo Road Gaol on Christmas Day, to save his mum.

The Gown: A Novel of the Royal Wedding by Jennifer Robson | FICTION ROBSON

An enthralling historical novel about one of the most famous wedding dresses of the twentieth century—Queen Elizabeth’s wedding gown—and the fascinating women who made it.

At school, Connell and Marianne pretend not to know each other. He’s popular and well-adjusted, star of the school soccer team while she is lonely, proud, and intensely private. But a strange and indelible connection grows between the two teenagers—one they are determined to conceal. A year later, they are both studying at Trinity College in Dublin. Marianne has found her feet in a new social world while Connell hangs at the sidelines, shy and uncertain. Throughout their years in college, Marianne and Connell circle one another, straying toward other people and possibilities but always magnetically, irresistibly drawn back together. Then, as she veers into self-destruction and he begins to search for meaning elsewhere, each must confront how far they are willing to go to save the other.

A gripping storyline, great characters and chilling atmosphere make this a riveting thriller.  As the murderer makes his way through the city of Copenhagen he leaves behind a handmade doll made of chestnuts and matchsticks.  Suspenseful, atmospheric and creepy at 516 pages you will be sad when it ends.

The thrilling follow-up to the award-winning Bluebird, Bluebird: Texas Ranger Darren Matthews is on the hunt for a boy who's gone missing - but it's the boy's family of white supremacists who are his real target.

Scotland Yard police officers Gemma James and Duncan Kincaid are off to the Cotswolds, kids in tow to attend a posh charity luncheon at the home of Sir and Lady Talbot. A tragic accident, then a hit and run and soon the vacationing couple are drawn into the case. This book is the 19th in the series but you don’t have to have read the others to enjoy it.

When her beloved nanny, Hannah, left without a trace in the summer of 1988, seven-year-old Jocelyn Holt was devastated. Thirty years later, Jo returns to the house and is forced to confront her troubled relationship with her mother. But when human remains are accidentally uncovered in a lake on the estate, Jo begins to question everything she thought she knew.

Revenge!  Isn’t it sweet?  One time socialite and rich girl Maud has become invisible. Cheated out of her inheritance she plots to get even, and does she ever.  With a bang, you will be drawn into this fun and interesting tale of poker, money and Maud’s high-stakes tale of revenge.

Alicia Berenson’s life is seemingly perfect. A famous painter married to an in-demand fashion photographer. One evening her husband Gabriel returns home late from a fashion shoot, and Alicia shoots him five times in the face, and then never speaks another word.

She Lies in Wait by Gytha Lodge | FICTION LODGE

1983, six friends head out on a camping trip, one pesky little sister comes along. And disappears. 30 years later her body is found unearthed in a hideaway that only the six friends knew about, and Jonah Sheens is put in charge of solving the long-cold case. Detective Sheens attended the same high school as these friends. Now he’s determined to finally get to the truth of what happened that night.

Tommy Jump, a struggling stage actor is offered the role of a lifetime: $150,000 for a six-month acting gig. Only it is not on stage, it is in prison. With a newly pregnant fiancée depending on him, it is an opportunity he cannot refuse, even though the offer comes from the strangest employer imaginable: the FBI.

As the headmaster credited with turning around the local school, Tom Fitzwilliam is beloved by one and all—including Joey Mullen, his new neighbor, who quickly develops an intense infatuation with him. One of Tom’s students, Jenna Tripp, also lives on the same street, and she’s not convinced her teacher is as squeaky clean as he seems. For one thing, he has taken a particular liking to her best friend, and Jenna’s mother—whose mental health has admittedly been deteriorating in recent years—is convinced that Mr. Fitzwilliam is stalking her.

Chloe lives in New York City, working in a coveted publishing job, while her sister Nicky married promising young attorney Adam and gave birth to a baby boy they named Ethan. The Taylor sisters became virtual strangers. Now, more than fifteen years later, their lives are drastically different—and Chloe is married to Adam. When an intruder at the couple’s East Hampton beach house murders him, Chloe reluctantly allows her estranged sister, Nicky—back into her life. The two sisters are forced to unite and to confront the truth behind family secrets they have tried to bury in the past.

Her One Mistake by Heidi Perks | FICTION PERKS

Could you take my daughter Alice to the school fair? Charlotte had her hands full, looking after her own children as well as her friend’s daughter. She only took her eyes off her for one second and Alice disappeared. Frantically searching everywhere, Charlotte knows she must find the courage to tell Harriet that her beloved only child is missing—and admit that she’s solely to blame.

My Sister, the Serial Killer by Oyinkan Braithwaite | FICTION BRAITHWAITE

Korede's sister, Ayoola calls her one night to help clean up after she murders her boyfriend. And this isn't the first time. Korede helps her like she always does. But when Ayoola starts dating the doctor Korede's long been in love with him, she isn't prepared to see him wind up with a knife in his back: but to save one would mean sacrificing the other...

Wild Game: My Mother, Her Lover and Me by Adrienne Brodeur | BIO BRODEUR

A daughter’s tale of living in the thrall of her magnetic, complicated mother, and the chilling consequences of her complicity.

Janis: Her Life and Music by Holly George-Warren | BIO JOPLIN

Written by one of the most highly regarded chroniclers of American music history, and based on unprecedented access to Janis Joplin’s family, friends, band mates, archives, and long-lost interviews, Janis is a complex, rewarding portrait of a remarkable artist finally getting her due.

The facts are stranger than fiction in Midnight in Chernobyl, a well-researched, detailed account of the Chernobyl Nuclear Disaster.

Gottlieb invites us into her world as both clinician and patient, examining the truths and fictions we tell ourselves and others as we teeter on the tightrope between love and desire, meaning and mortality, guilt and redemption.

An American Summer: Love and Death in Chicago by Alex Kotlowitz | 364.15 KOT

Over the past twenty years in Chicago, 14,033 people have been killed and another roughly 60,000 wounded by gunfire. What does that do to the spirit of individuals and community? Drawing on his decades of experience, Alex Kotlowitz set out to chronicle one summer in the city, writing of individuals who have emerged from the violence and whose stories capture the capacity--and the breaking point--of the human heart and soul.

Save Me the Plums by Ruth Reichl | BIO REICHL

This wonderful memoir by the former and last Editor in Chief of Gourmet takes the reader behind-the-scenes at the workings of the magazine. This book tells the story of the moment restaurants became an important part of popular culture, when chef’s became stars, a time when the rise of the farm-to-table movement changed the way we eat. Reichl’s poignant and hilarious account brings into this world and takes us along on her journey of what it took to bring Gourmet Magazine back to life.

This little book is full of wisdom, wit, and insight, celebrating the love and joy of being a grandmother.  Pulitzer Prize–winning columnist and bestselling author Quindlen often writes on the joys and challenges of family, motherhood and modern life.  Now she is a grandmother and she offers insights into this new role: no longer mother and decision maker but secondary character and support to the parents of her grandson.

The stunning story of an Alabama serial killer and the true-crime book that Harper Lee worked on obsessively in the years after To Kill a Mockingbird.