We're in the Movies: The Lake Forest Connection 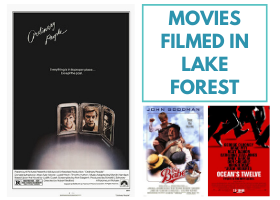 Lake Forest is known for many things glamorous. F. Scott Fitzgerald’s love and muse Ginevra King, the popularity of Polo in the U S in the 1930’s, visiting royalty such as the Duke and Duchess of Windsor and the King of Sweden. Lake Forest is also famous for its beautiful estates and lovely vistas on the shores of Lake Michigan. Because we are 30 minutes north of Chicago, Lake Forest is an ideal location to film. We have four seasons, settings that mirror the East Coast and perhpas most importantly, we are always excited to welcome the stars.

Over the past 40 plus years many well-known movies have been filmed in Lake Forest. One of the most famous was the film Ordinary People based on the 1976 book by Judith Guest. The movie stars Mary Tyler Moore in a role that is the polar opposite of her characters Laura Petrie and Mary Richards. Mary Tyler Moore plays a wealthy suburban mother struggling after the death of her beloved son in a sailing accident on Lake Michigan. Her surviving son played by Timothy Hutton and her husband Donald Sutherland are also suffering and doing their best to cope while their family falls apart around them. Other acclaimed actors in this film include Elizabeth McGovern and Judd Hirsch. And did I mention that this film was Robert Redford’s debut as a director? It received numerous awards including an Academy Award for best picture.

Another film shot in Lake Forest is Oceans Twelve. George Clooney and Julia Roberts star as partners in crime. Next time you watch it, look for their meet up on Bank Lane and at the East Lake Forest Train Station.

Lake Forest Academy has been a popular location for filming as well, including, The Babe staring John Goodman, The Package starring Tommy Lee Jones, Gene Hackman and Dennis Franz and The Omen II: Damien starring William Holden and Lee Grant.

One interesting movie that involves Lake Forest Academy is Elevate. This is a documentary about a group of young men in Senegal who have dreams of coming to the United States to a Boarding/Prep school and from there to college and the NBA. Do some of these young men achieve this dream? This movie is available to stream right now through the Hoopla app! Visit https://www.lakeforestlibrary.org/download-stream/digital-media/movies-music for more information on Hoopla.

Some Favorites Filmed in Lake Forest:

1988 A Night in the life of Jimmy Reardon

For a complete list of movies filmed in Lake Forest, visit IMDB here.