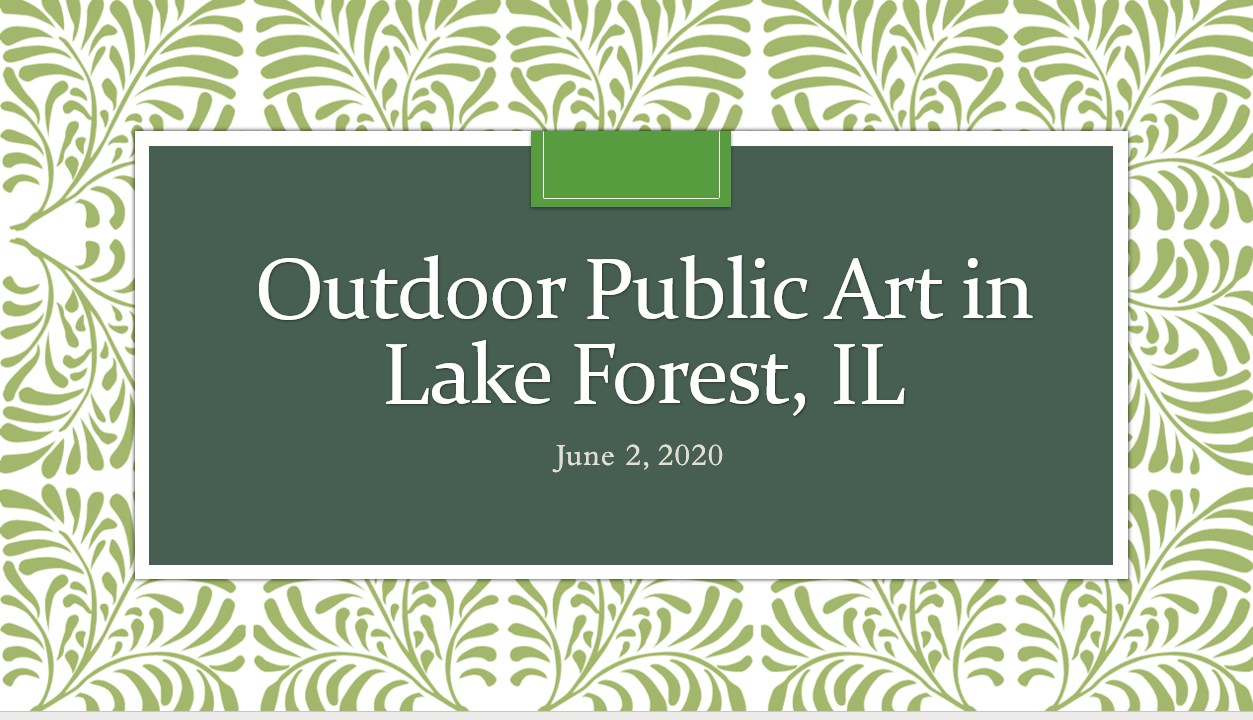 Ex Libris by Michael B. Croydon​

The sculpture entitled Ex Libris, designed by Michael B. Croydon and fabricated by Daniel T. Blue, was commissioned by the Deer Path Art League for the Library’s Centennial. The title of the sculpture is a reference to the Latin term used on bookplates meaning "From the books of ..."  ​Like humans, the books vary in height, width, and depth. All seem to be well-worn; the patina reflecting the earth and sky. Growing out of a deep appreciation for the classical, antimodern inspiration behind the original 1931 Library building, Croydon explains that his work "manages a highly respectful updating of the image of the Library through the sculpture’s modern form, but with profound homage paid to traditional information and knowledge."​  Installed in 1996, Ex Libris includes six pieces in varying heights and widths, generally to human scale, arranged in a convex arc out from the building and down the slope. Each of the six elements of the sculpture represents books or groupings of books, more or less as if arranged on a shelf.

Iconic for the city of City of Lake Forest, Friends (1969) by Sylvia Shaw Judson stands as a fountain centerpiece in Market Square.  Friends is a bronze sculpture showing a young girl balancing an even younger boy on her shoulder.​  Born in Chicago and a resident of Lake Forest, Judson's pieces reflect upon children, nature, animals and rural life.  ​Her most famous pieces are "Little Gardner" at the White House, and "Bird Girl" in Savannah, Georgia. Dozens of Judson's pieces are located in and around Lake Forest.  Her beloved "Apple Tree Children" (1967) stands in the Childrens' Library at the Lake Forest Library.​ "Friends" is Judson's last piece, and it is her only piece that shows two human figures.

The deer statue (19th Century) proudly stands at Triangle Park which is located at the corners of Deerpath, Walnut and Washington. ​
She is representative of the large deer population in the area.  Friends and neighbors decorate her for the seasons.

Commissioned in 2004 by the Malin Family in loving memory of their son, this statue of Steven Brian Malin, Jr. stands proudly at Everett Park.​ The Malin Family dedicated the statue and the baseball diamond at Everett Park in testimony to their young son's untimely death and his love of baseball.  ​The statue is a life-sized incredibly detailed bronze piece that depicts Steven in his baseball uniform.

The Barrell Memorial Gate stands at the entrance to the Lake Forest Cemetery.  ​The Barrell Memorial Gateway at Lake Forest Cemetery was designed by architect James Roy Allen with wrought iron gates by renowned Philadelphia blacksmith  Samuel Yellin.  Three images are depicted on the gates: the Angel of Truth, the Angel of Light, and Saint Peter, whose figure serves as the doorknocker.