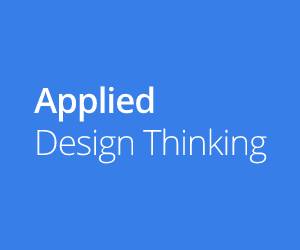 From experience, you could say I know a thing or two about the whole creative process. That is another way to describe design thinking.

Design thinking is more than something art-related, and that's important to understand. It's a universal way to solve problems or a strategic path to find a solution. Strategic is the keyword. The problem and solution might sound like the most important things, but the process is just as important to the big picture if not more. Creative people encourage it to be fun, and I've enjoyed those times of exploratory discussion. Lots of positive energy, like a playground for the older child in you. No ideas go unnoticed, and it's important to see if they all can be turned into viable solutions. Choosing the final result is up to the team or people involved.

I've always appreciated creatives for their ability to push through boundaries with unorthodox or innovative thinking. Those two are pretty much interchangeable. Status quo thinking can be awfully restricting.

Apple: Not Just a Computer Company

If you weren't familiar with Apple before its renaissance, Steve Jobs led the charge of redesigning how the computer is known today. Computers were hideous and pretty much only known as the nerd's tool. It wasn't considered cool by the masses, but that's long changed because of Steve Jobs and his vision for Apple. Their Chief Design Officer, Jony Ive, should also be given credit for this.

So Steve Jobs thought, "How can we make computers cool?" He and the team challenged the status quo, from what computers were and questioned what could be done. It was around 1998 when the iMac G3 was born, which was a compact machine that stood out. It was different and unlike anything we've seen. Apple built upon their all-in-one machine that they helped popularize. I remember seeing the iMac for the first time and being impressed. Despite this "shiny new object," Apple carried over the underwhelming OS9 software from its predecessors. This was the beginning, when the computer experience started to change. A few years later, Apple released the beautiful new OSX operating system. Not only did it look great, but it was very powerful and reliable. Compared to Microsoft Windows, it was that much better. This was around 2001, when Microsoft Windows XP was making strides.

Challenging themselves and status quo, Apple continued to innovate on both hardware and software, going down to the smallest of details. This period included the introduction of mobile devices such as the iPod, iPhone and finally the iPad. We all know how that turned out.

Apple was previously lurking in the shadows as a second-rate computer company, not to mention its technology. They've long shattered that status and emerged as the industry leader for technology and beyond.

Apple is a product of design thinking, which should not be underestimated.

In art school, my favorite class exercise reinforced what the theory was all about. Privileged to learn from a well-known designer, I've been taught something that's been part of my practice since. Our instructor, the designer Paul Sahre, simply wrote on the board:

He said to come back in a few hours to show our work. Some had questions, and Paul could only shrug his shoulders. A lot of us stood there perplexed for a minute or so. I could tell that the wheels were spinning for my other classmates and remember seeing many of them go through their own process from research to sketching and bouncing ideas off others. I was in their shoes too, but I took more time to think about the assignment.

If I recall correctly, I started to do some digital illustration in Photoshop. Minutes later, I had a lightbulb moment. So, I went with that. When it came time to share our work, I saw my classmates unveil some well-designed pieces. From illustration to a personal artwork piece, it's pretty much what I expected.

But mine was different and stood out. I had a simple printout, not overly artistic, and saw the reactions of my classmates. They were more surprised, and my teacher was the only one smiling. Paul knew I understood the assignment and what the lesson was. I shared something like this:

My solution was a literal translation, and there was nothing wrong with that. I met the requirements, and that's all that mattered. So ever since then, I've understood this kind of approach to problem-solving. If you think about it, you can turn something quite mundane and make it fun. And that's where things get really interesting. I know I've had many conversations about this, eventually unearthing solutions for what was being discussed.

And until next time, please stay healthy and safe!