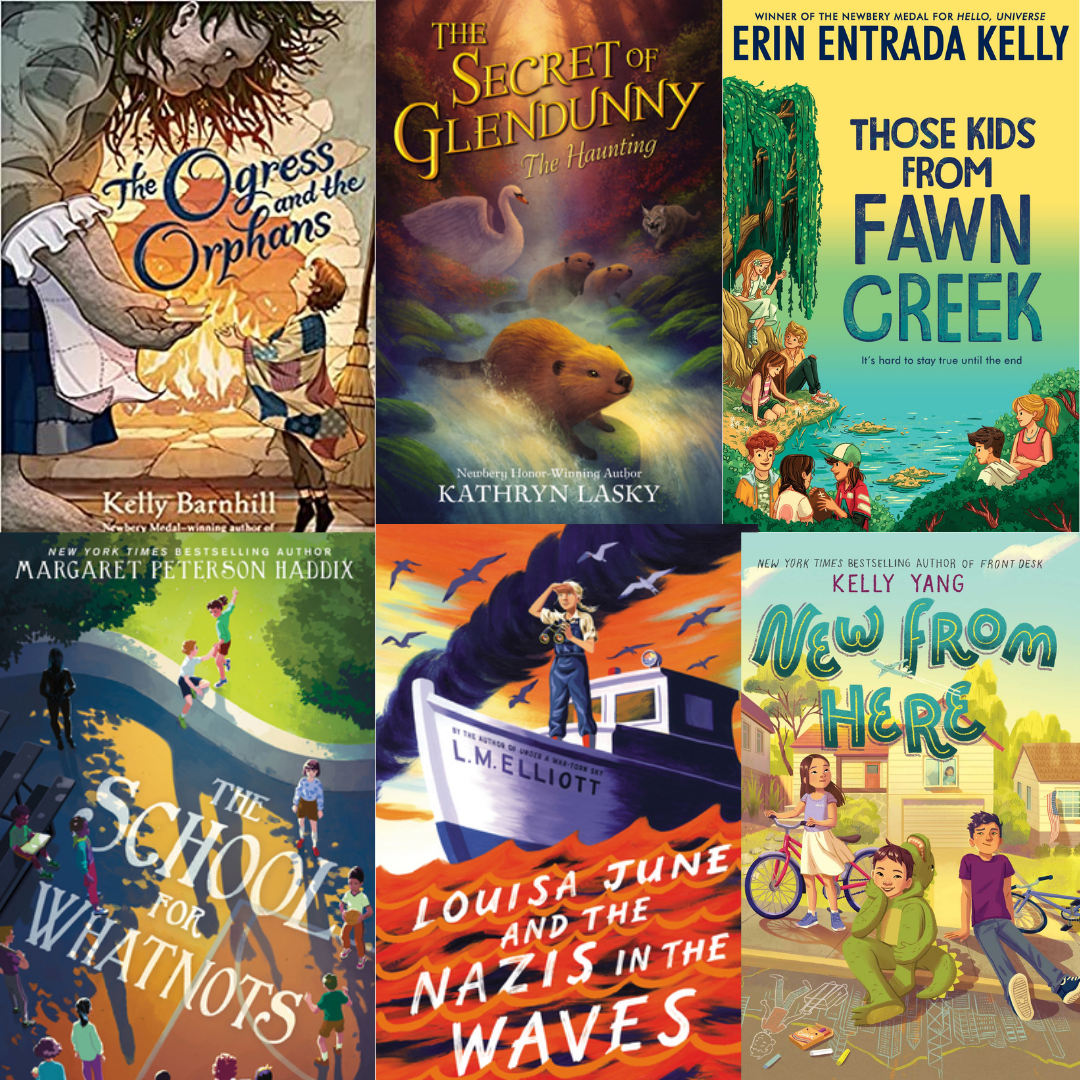 The Ogress and the Orphans by Kelly Barnhill.  By the author of The Girl Who Drank the Moon, another fantasy fable about the power of goodness and how we can be blinded to the truth.  Stone-in-the-Glen, which used to be a wonderful town has become desolate and miserable. How, why? Is it because of the Ogress, or is she going to be its salvation?  Great storytelling, rich language, and a mysterious narrator.  A story you just want to settle in with and see where it takes you. Gr 4+

Orphans of the Tide by Struan Murray.  Another group of orphans help save the city.  This trio rescues a boy pulled from the body of a washed-up whale.  When he is accused of being the "Vessel” for the evil “Enemy”, Ellie and other orphans try to save him.  An adventure fantasy set in a vaguely steampunk world with some religious allusions. Gr 4-7.

The Legend of the Dream Giants by Dustin Hansen.  Another story about a large person just looking for love.  The author/illustrator intersperses chapters with pages of monochromatic drawings that tell a companion story of a magical bear and dream sand; similar to Brian Selznick’s work. Gr 4-7.

Cress Watercress by Gregory MaGuire/illust. David Litchfield.  Great family read aloud about a rabbit family who moves into a rundown apartment tree populated by an assortment of wildlife, each with a unique personality.  In the tradition of Wind in the Willows and those classic Disney animal movies. Gr 2-6.

New From Here by Kelly Yang.  Recounts a family’s attempt to outrun the corona virus by leaving Hong Kong for the US in early 2020.  However, life is complicated everywhere, they find out.  Yang again writes about a loving, typical family facing challenges. Gr 3-7.

Those Kids from Fawn Creek by Erin Entrada Kelly.  Touching story about a small town and how we might think we know all about each other, but don’t.  When a new girl arrives, the 7th graders are initially suspicious because she is so different, but Orchid ends up having a positive effect on them.  Told from multiple viewpoints.  Good for fans of the Mr. Terrupt series.

The Secret of Glendunny: the Haunting by Kathryn Lasky.  Exciting, suspenseful animal adventure set in the wilds of Scotland in an ancient beaver colony befriended by human ghosts.  A good dose of English history thrown in, too. Gr 3-7.

Louisa June and the Nazis in the Waves by L.M. Elliott.  Life at the homefront along the Virginia seacoast as German U-boats pose a constant threat during the early days of WWII. Gr 5-8.

Unseen Magic by Emily Lloyd-Jones.  A tale of a timid girl who discovers a magical tea shop that helps her forget the things she doesn’t want to remember.   Good choice for fans of Snicker of Magic, only set in Pacific Northwest and with an uneasy sense of danger in the mysterious town of Aldemere with its many odd rules and customs. Gr 3-7.

Pencilvania by Stephanie Watson.  Twelve-year-old Zora finds herself transported into a fantastic world where all her drawings have come to life.  Heavily illustrated. Gr 3-7.

Burying the Moon by Andree Poulin.  In Latika's village in rural India, there are no toilets. No toilets mean that the women have to wait until night to do their business in a field. There are scorpions and snakes in the field, and germs that make people sick.  This beautifully illustrated novel in verse shines a light on how a lack of access to sanitation facilities affects girls and women in many parts of the world. Gr 4-7.

The Samosa Rebellion by Shanthi Sekaran.  A twelve-year-old boy's life changes when his grandmother comes from India to live with the family in Mariposa, an island country known for its butterflies, that is becoming hostile to immigrants. Gr 5-8.

The School for Whatnots by Margaret Peterson Haddix.  Another sci fi thriller from a master of the genre for middle graders.  Max’s rich parents send him to a school where all the other children are whatnots – androids programmed to be perfect children.  All except one...    Gr 3-7.

Storm by Nicola Skinner.  Frankie always had a temper. And you know what did nothing to quell her anger? Dying dramatically in a freak natural disaster that wiped out her whole town. As a ghost, it's not so easy for Frankie to hide her rage, especially when suspicious visitors to her ruined home seem to have a keen and ominous interest in her.  More funny than scary. Gr 5-9.

Isla to Island by Alexis Castellanos.  Nearly wordless graphic novel follows Marisol as she is sent by her parents from Cuba to Brooklyn, NY to escape Castro’s regime.  The colorful vivacity of Havana is replaced by a drab city, reflecting Marisol’s inner feelings. Gr 5+