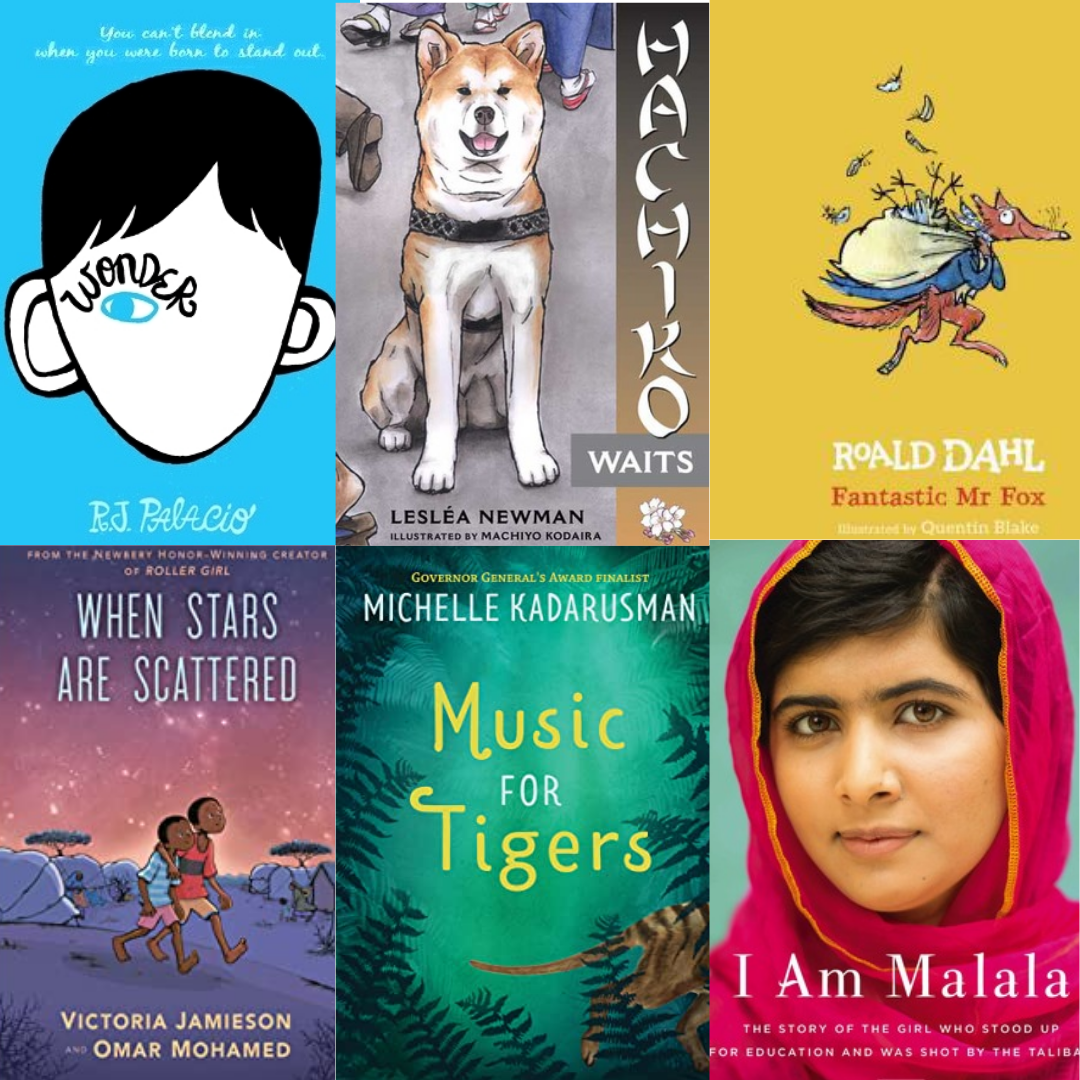 The One and Only Ivan by Katherine Applegate.  Ivan, a gorilla who has lived for years in a down-and-out circus-themed mall, meets baby elephant Ruby, a new addition to the menagerie, and decides he must find her a better life.  Gr 3+.

The Girl Who Drank the Moon by Kelly Barnhill.  An epic fantasy about a young girl raised by a witch, a swamp monster, and a Perfectly Tiny Dragon, who must unlock the powerful magic buried deep inside her.  Gr 4+.

Tales of a Fourth Grade Nothing by Judy Blume.  Sibling rivalry between Peter and his little brother Fudge is softened by a sense of humor and a loving family. Gr 2-4.

Runaway Ralph by Beverly Cleary.  Ralph runs away from home on his motorcycle looking for freedom and adventure but ends up a prisoner at a summer camp. Gr 2-4.

Fantastic Mr. Fox by Roald Dahl.  [Winner of the Lake Forest Library Mock Newbery competition!] Three farmers, each one meaner than the other, try all-out warfare to get rid of the fox and his family. Gr 2-4.

Because of Winn Dixie by Kate DiCamillo.  Ten-year-old India Opal Buloni describes her first summer in the town of Naomi, Florida, and all the good things that happen to her because of her big ugly dog Winn-Dixie.  Gr 3-5.

Out of My Mind by Sharon Draper.  Considered by many to be mentally retarded, a brilliant, impatient fifth-grader with cerebral palsy discovers a technological device that will allow her to speak for the first time.  Gr 4-6.

Owl Diaries: Eva’s Treetop Festival by Rebecca Elliot.  Having a Bloomtastic Festival at school to celebrate spring is a great idea--but Eva Wingdale, a young owl, discovers that it is also a lot of work.  Gr 2-4.

The Bread Winner by Deborah Ellis.  Because the Taliban rulers of Kabul, Afghanistan, impose strict limitations on women's freedom and behavior, eleven-year-old Parvana must disguise herself as a boy so that her family can survive after her father's arrest. Gr 4-6.

Unicorn Rescue Society: The Creature of the Pines by Adam Gidwitz.  After encountering a Jersey Devil while on a field trip to the Pine Barrens, Elliot and his new friend Uchenna help their weird teacher Professor Fauna rescue the mythological creature from a pair of greedy billionaire brothers. Gr 2-5.

Ground Zero by Alan Gratz.  Two intertwining stories taking place on September 11, 2001 and 18 years later.  Brandon is at work with his dad at the World Trade Centers when the planes crash into them.  Rashmina has grown up under the shadow of the ensuing war in Afghanistan.  Riveting and visceral.  Gr 5+.

The Million Dollar Shot by Dan Gutman.  Eleven-year-old Eddie gets a chance to win a million dollars by sinking a foul shot at the National Basketball Association finals. Gr 3-5.

The Fourteenth Goldfish by Jennifer Holm.  Ellie's scientist grandfather has discovered a way to reverse aging and has turned back into a teenager--which makes for complicated relationships when he moves in with Ellie and her mother, his daughter. Gr 3-7.

When Stars are Scattered by Victoria Jamieson and Omar Mohamed.  Omar and his younger brother Hassan live in a refugee camp, and when an opportunity for Omar to get an education comes along, he must decide between going to school every day or caring for his nonverbal brother. Based on a true story. Gr 4 +

Invisible Inkling by Emily Jenkins.  When Hank Wolowitz runs into trouble in the form of a lunch-stealing bully, he finds an unlikely ally in an invisible pumpkin-loving bandapat named Inkling. Gr 2-5.

Music for Tigers by Michelle Kadarusman.  Louisa, a violinist suffering from stage fright, is sent to the Tasmanian rain forest camp of her Australian relatives. There she learns that her family secretly protects the supposedly extinct Tasmanian tigers. When an encroaching mining operation threatens the hidden sanctuary, Louisa realizes her music can help. Gr 4-7.

Diary of a Wimpy Kid by Jeff Kinney. Greg records his sixth-grade experiences in middle school along with his best friend, Rowley. Gr 4-6.

Rules by Cynthia Lord. Frustrated at life with an autistic brother, twelve-year-old Catherine longs for a normal existence but her world is further complicated by a friendship with a young paraplegic. Gr 4-7.

Judy Moody was in a Mood by Megan McDonald. Introduces us to Judy Moody, her family and friends, as she approaches the first day of third grade unenthusiastically. Gr 2-4.

Shiloh by Phyllis Reynolds Naylor. When he finds a lost beagle in the hills behind his West Virginia home, Marty tries to hide it from his family and the dog's real owner, a mean-spirited man known to mistreat his dogs. Gr 4-7.

Hachiko Waits by Leslea Newman. Loyal Akita, Hachiko, waits for his master at the train station every afternoon, and even after the professor has a fatal heart attack while at work, Hachiko faithfully continues to await his return until the day the dog dies. Based on a true story. Gr 2-4.

Wonder by R.J. Palacio. August Pullman was born with a facial deformity that, up until now, prevented him from going to a mainstream school. Starting 5th grade at Beecher Prep, he wants nothing more than to be treated as an ordinary kid -- but his classmates can't get past Auggie's extraordinary face.  Told from multiple viewpoints. Gr 4-6.

Prairie Lotus by Linda Sue Park. In Dakota Territory in the 1880s, half-Chinese Hanna and her white father face racism and resistance to change as they try to make a home for themselves. Gr 4-7.

Pax by Sara Pennypacker. Peter's dad enlists in the military and makes him return his pet fox to the wild and go live with his grandfather. Peter knows he isn't where he should be, with Pax. He strikes out on his own despite the encroaching war, spurred by love, loyalty, and grief, to be reunited with his fox. Gr 3-7.

Orphan Island by Laurel Snyder. On an island where one child is delivered each year while the eldest is taken away, nine children live under the leadership of new elder Jinny, who trains the latest newcomer and wonders what will happen when her own departure occurs. Gr 3-7.

I Survived the Great Chicago Fire by Lauren Tarshis. Oscar is a victim of and witness to the Fire of 1871 as he struggles to outrun and outswim the inferno. Gr 4-6.

Sisters by Raina Telgemeier. First (and maybe the best) in the now popular graphic novel genre of the trials and tribulations of family life and growing up. Gr 4-6.

I am Malala by Malala Yousafzai. When the Taliban took control of the Swat Valley in Pakistan, one girl spoke out. Malala Yousafzai refused to be silenced and fought for her right to an education. For mature readers. Gr. 5+