Novels in Verse for Youth 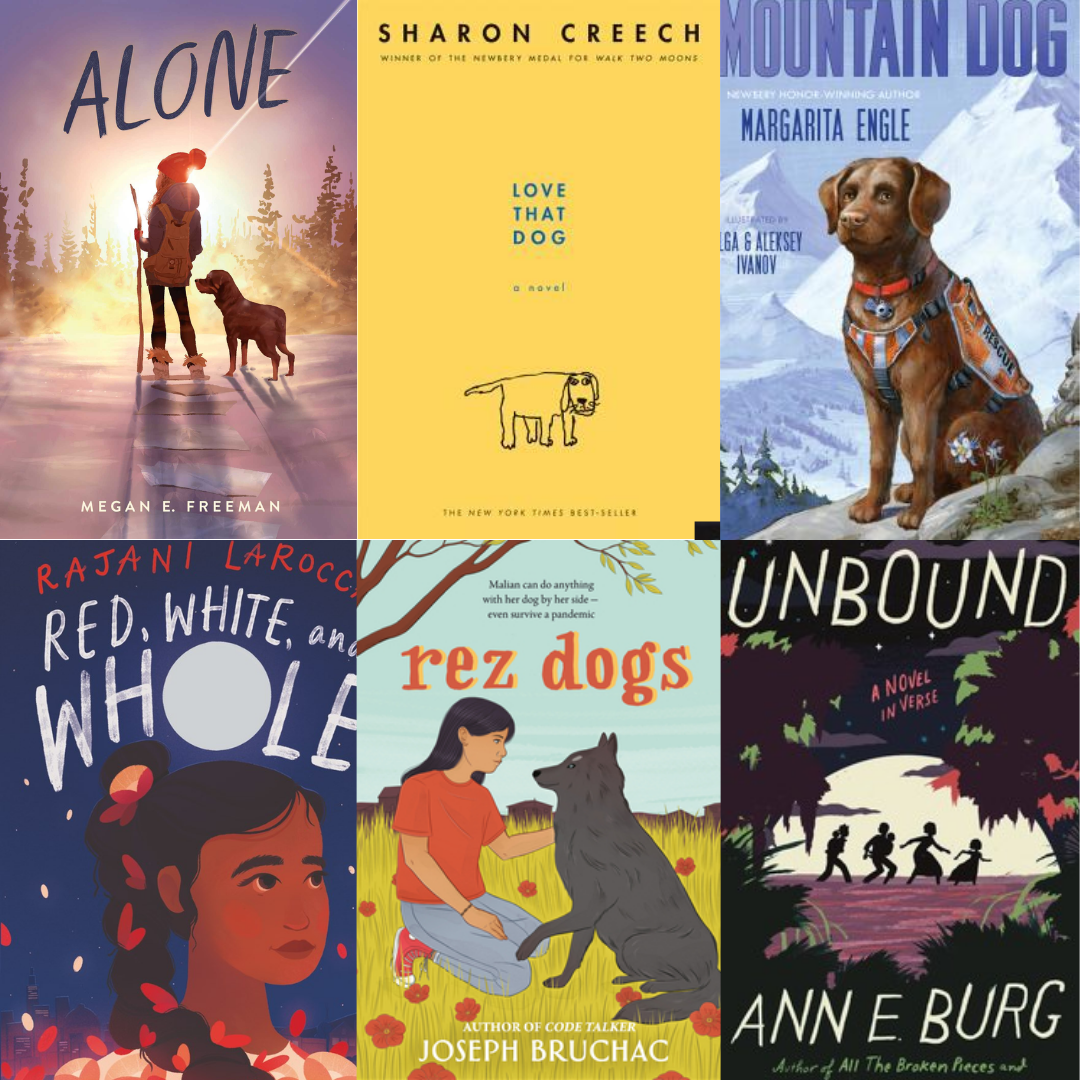 The Crossover by Kwame Alexander.  Fourteen-year-old twin basketball stars Josh and Jordan wrestle with highs and lows on and off the court as their father ignores his declining health.

Home of the Brave by Katherine Applegate.  Kek, an African refugee, is confronted by many strange things at the Minneapolis home of his aunt and cousin, as well as in his 5th grade classroom, and longs for his missing mother, but finds comfort in the company of a cow and her owner.

Little Dog Lost by Marion Dane Bauer.  A boy, a dog, and an old man are lonely before the boy plans a rally, the dog looks for a boy, and all the townspeople run to the old man's aid when lightning strikes his home and something miraculous happens.

Shark Girl by Kelly L. Bingham.  After a shark attack causes the amputation of her right arm, fifteen-year-old Jane, an aspiring artist, struggles to come to terms with her loss and the changes it imposes on her day-to-day life and her plans for the future.

Rez Dogs by Joseph Bruchac.  Twelve-year-old Malian lives with her grandparents on a Wabanaki reservation during the COVID-19 pandemic.

Unbound : a novel in verse by Ann E. Burg.  The day nine-year-old Grace is called to work in the kitchen in the Big House, everyone warns her to keep her head down and her thoughts to herself, but the more she sees of the oppressive Master and his hateful wife, the more she questions things.

Love That Dog by Sharon Creech.  A young student, who comes to love poetry through a personal understanding of what different famous poems mean to him, surprises himself by writing his own inspired poem.

Audacity by Melanie Crowder. A historical fiction novel in verse detailing the life of Clara Lemlich and her struggle for women's labor rights in the early 20th century in New York.

Mountain Dog by Margarita Engle.  When his mother is sent to jail in Los Angeles, eleven-year-old Tony goes to live with his forest ranger great-uncle in the Sierra Nevada Mountains, where Tony experiences unconditional love for the first time through his friendship with a rescue dog.

Alone by Megan Freeman.  A young girl wakes up one day to find herself utterly alone—left behind in a town that has been mysteriously evacuated and abandoned. With no one to rely on, no power, and no working phone lines or internet access, Maddie slowly learns to survive on her own.

Diamond Willow by Helen Frost.  Using diamond-shaped poems inspired by forms found in polished diamond willow sticks, Helen Frost tells the moving story of Willow and her family. Hidden messages within each diamond carry the reader further, into feelings Willow doesn't reveal even to herself.

Applesauce Weather by Helen Frost.  When the first apple falls from the tree, Faith and Peter know that it's applesauce weather, even though Peter is getting a little old for such things. It also means Uncle Arthur should be here to tell his stories.  Paired with warm, expressive illustrations by Amy June Bates, this heartfelt tale highlights the strength of family and the power of a good story"

Words with Wings by Nikki Grimes.  Gabby daydreams to tune out her parents' arguments, but when her parents divorce and she begins a new school, daydreaming gets her into trouble... until she finds a friend who also daydreams and her teacher decides to work a daydreaming-writing session into every school day.

Out of the Dust by Karen Hesse.  In a series of poems, fifteen-year-old Billie Jo relates the hardships of living on her family's wheat farm in Oklahoma during the dust bowl years of the Depression.

Inside Out & Back Again by Thanhha Lai.  A young girl chronicles the life-changing year of 1975, when she, her mother, and her brothers leave Vietnam and resettle in Alabama.

Red, White, and Whole by Rajani LaRocca.  Reha, who dreams of becoming a doctor even though she can't stomach the sight of blood, is determined to make her mother well again. She'll be the perfect daughter, giving up her dreams, if it means saving her mother's life

Never Forgotten by Pat McKissack.  In eighteenth-century West Africa, a boy raised by his blacksmith father and the Mother Elements--Wind, Fire, Water, and Earth--is captured and taken to America as a slave.

Like Bug Juice on a Burger by Julie Sternberg.  As the days go on, nine-year-old Eleanor realizes that maybe being at summer camp isn't so bad after all, and is full of special surprises.

A Time to Dance by Padma Venkatraman.  In India, a girl who excels at Bharatanatyam dance refuses to give up after losing a leg in an accident. Padma

Locomotion by Jacqueline Woodson.  Eleven-year-old Lonnie writes about his life, after the death of his parents, separated from his younger sister, living in a foster home, and finding his poetic voice at school.