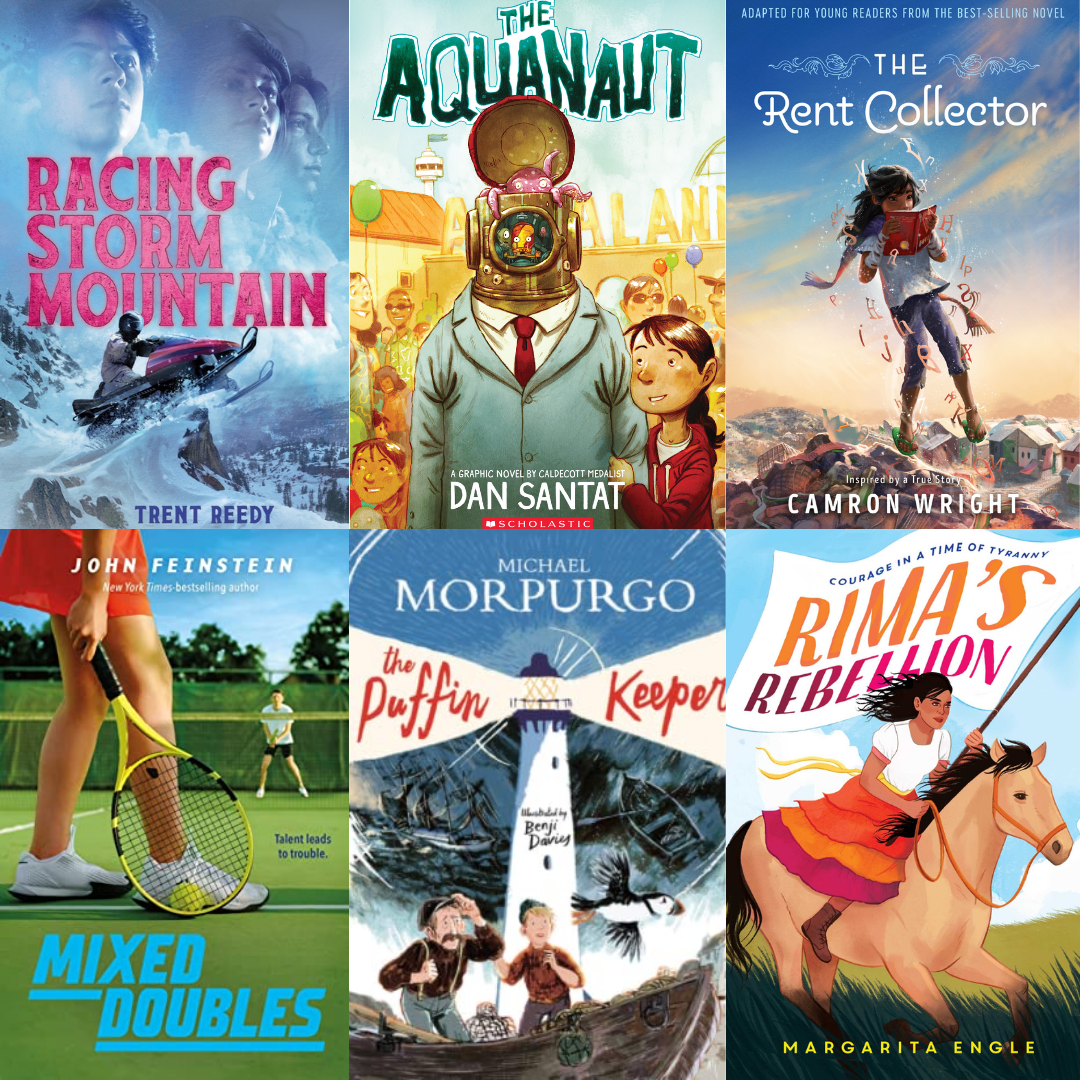 The Puffin Keeper by Michael Morpurgo.  As a child, Allen is saved from a nautical disaster by Benjamin Postlethwaite, a solitary lighthouse keeper. Years later, Allen returns to the lighthouse, and the two nurse an injured young puffin back to health. When Allen is called up to fight in World War II his fond memories of his time at the lighthouse keep him going, even through prison camp. Good family read-aloud. Gr 2+.

The Counterclockwise Heart by Brian Farrey.  Young Prince Alphonsus is sent by his mother, the Empress Sabine, to reassure their people while she works to quell the threat of war. But Alphonsus has other problems on his mind, including a great secret: He has a clock in his chest where his heart should be--and it's begun to run backwards, counting down to his unknown fate.  Gr 4-6.

Rules for Vampires by Alex Foulkes.  The Nevermoor series meets Hotel Transylvania in this adventure set in a world of talking spiders, living forests, and haunted castles about a vampire girl who wants to fit in but first must defeat an evil ghost.  Gr 4-6.

The Keeper by Guadalupe Garcia McCall.  James always knew moving from Texas to Oregon was going to be horrible. No sooner have he and his family arrived than he starts getting mysterious letters from someone called the Keeper. Someone who claims to be watching him.  But who can he trust?  Gr 4-6.

It’s the End of the World and I’m in My Bathing Suit by Justin A. Reynolds.  When the electricity goes out, 12 year old Eddie and his friends set out to investigate what is going on.They make the startling discovery that they are the only ones left in their neighborhood--and perhaps the only people left anywhere.  More funny than eerie. Gr 3-7.

Sofia Acosta Makes a Scene by Emma Otheguy.  Sofía Acosta, a fifth grader trying to fit into her ballet-obsessed Cuban American family and her affluent suburban New York community, learns to speak up for herself and others when she mistakenly reveals a visiting dancer's plan to defect to the United States.

A Wilder Magic by Juliana Brandt.  For generations, Sybaline Shaw's family has lived in an enchanted valley in the Appalachian Mountains, using their magic to help grow the land. But now the government has built a dam that will force the Shaws to relocate, and they're running out of time before their home will be flooded.  Gr 4-7.

A Song Called Home by Sara Zarr.  Receiving a mysterious guitar the night before she leaves the city to live with her mom and new stepdad, Lou believes that if she learns how to play it, she can bring a piece of her old life home.  Gr 4-7.

Consider the Octopus by Nora Raleigh Baskin/Gae Polisner.  When chance, or fate, throws two 12 year-olds together on board a scientific research ship at the edge of the Great Pacific Garbage Patch, it's not all smooth sailing! Gr 4-8.

Racing Storm Mountain by Trent Reedy.  Kelton Fielding sees his chance to impress his classmates when a snowmobile race is announced, but when the popular kids follow him into the backcountry, Kelton and the others find themselves in real danger, relying on their wits and teamwork to survive.  Gr 4+.

Rima’s Rebellion by Margarita Engle.  Novel in verse describing 1920s Cuba. Rima is bullied and shunned for her illegitimacy, but finds solace in riding her horse and forges unexpected friendships with others who share her dreams of freedom and suffrage.  Gr 6+.

The Rent Collector by Cameron Wright.  Adapted for young readers.  Sang Ly lives at Cambodia's city dump and is grateful she can help earn a living for her family by sifting through the trash for recyclables and things that can be repaired and sold.  When Sopeap – the Rent Collector- sees a book lying on Sang Ly's cardboard bed, she offers the family sanctuary if she may have the book. An unlikely friendship develops between the two women. Gr 4-8.

The Aquanaut by Dan Santat.  With her father lost at sea, Sophie wanders aimlessly around Aqualand, a marine theme park, until an "aquanaut" breaks into the park's research lab, revealing Aqualand's dark side, and vowing to free the captive marine life with her help.

Swan Lake: Quest for the Kingdoms by Rex [Ogle] Terciero/Megan Kearney. A reimagining of the opera Swan Lake.   Destined to be enemies, two princesses--Odette, burdened by a curse, and Dillie, longing for adventure--become the best of friends as they follow an ancient legend to make everything right.

Rema Chronicles by Amy Kibuishi.  Tabby Simon is determined to learn what happened to her father, who was found dead after researching a tree that leaks a mysterious mist in her neighborhood. She is unexpectedly led to Rema, a distant world of magic and beauty that is periodically invaded by a nearby planet desperate for resources.  Sweeping adventure and light romance.