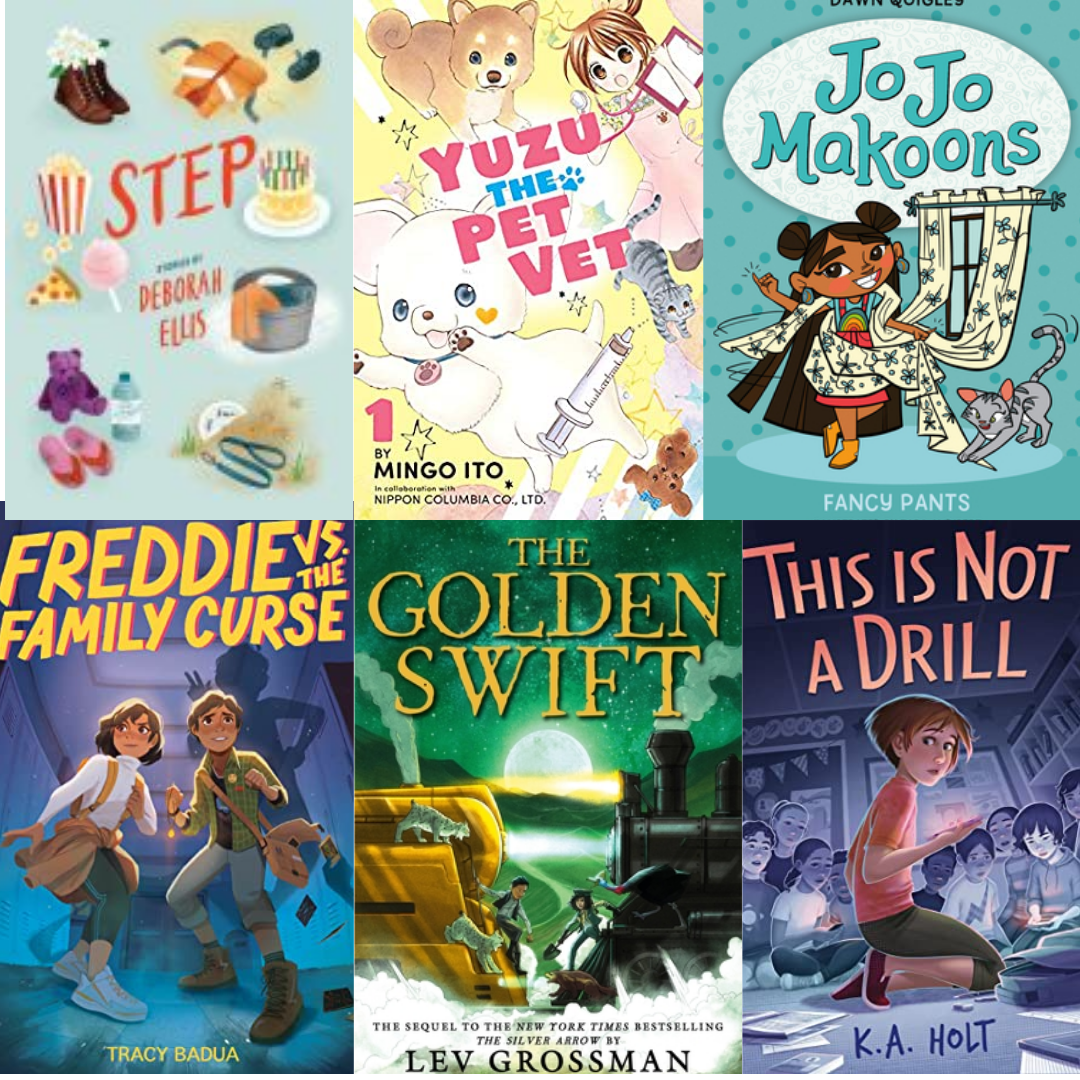 Jo Jo Makoons: Fancy Pants by Dawn Quigley. First grader Jo Jo Makoons knows how to do a lot of things, like how to play jump rope, how to hide her peas in her milk, and how to be helpful in her classroom. But there's one thing Jo Jo doesn't know how to do: be fancy.

Freddie vs the Family Curse by Tracy Badua. Hardluck Freddie thinks his luck might change when he finds an old family heirloom amulet. Unfortunately, the ghosts and evil spirits imprisoned within it are determined to continue the curse. Told with a heavy dose of humor.

Golden Swift by Lev Grossman. Sequel to The Silver Arrow, about 2 children who are conductors on a magical train that can talk, travel ANYwhere and has a mission to help save endangered wildlife.

This is Not a Drill by K.A. Holt. Suspenseful account of a student caught on the wrong side of security with an intruder. Told entirely through texts.

Step by Deborah Ellis. Short stories illuminating characters from around the world as they turn 11.

Every Bird a Prince by Jenn Reese. After she saves the life of a bird prince and becomes their champion, Eren Evers must defend a forest kingdom, save her mom, and keep the friendships she holds dear.

Zachary Ying and the Dragon Emperor by Xiran Jay Zhao. After his AR gaming headset is possessed by the spirit of the First Emperor of China, Chinese American Zack Ying is compelled to travel across China to steal an ancient artifact, fight figures from Chinese history and myth, and seal a portal to prevent malicious spirits from destroying the human realm.

Jennifer Chan is Not Alone by Tae Keller. An emotional Now and Before story about a classmate’s disappearance and what led to it.

Osmo Unknown and the Eightpenny Woods by Catherynne Valente. A long and winding tale about a boy who must venture into the unknown to atone for the accidental killing of a magical beast. Wonderful storytelling.

The Edge of In Between by Lorelei Savaryn. Another take on The Secret Garden, more symbolic of the use of color and black and white to describe our lives.

Monsters in the Mist by Juliana Brandt. A lighthouse on an island in Lake Superior is the setting for this atmospheric, eerie story of shipwrecks, ghosts, and real-life danger.

Bravely by Maggie Stiefvater. Based on the movie Brave, high Scottish fantasy by young adult writer.

Tell No Tales by Sam Maggs and Kendra Wells.  A swashbuckling adventure inspired by the historical exploits of real-life female pirates Anne Bonny.

Green Arrow: Stranded by Brendan Deneen and Bell Hosalla.  Following a plane crash on a deserted island, 13-year-old Oliver Queen must learn the skills he needs to survive and to protect his injured father.

Yuzu the Pet Vet by Mingo Ito. Manga for elementary and middle grade readers about a young girl who must overcome her fears of animals to work at her uncle’s vet clinic.5 volumes so far.