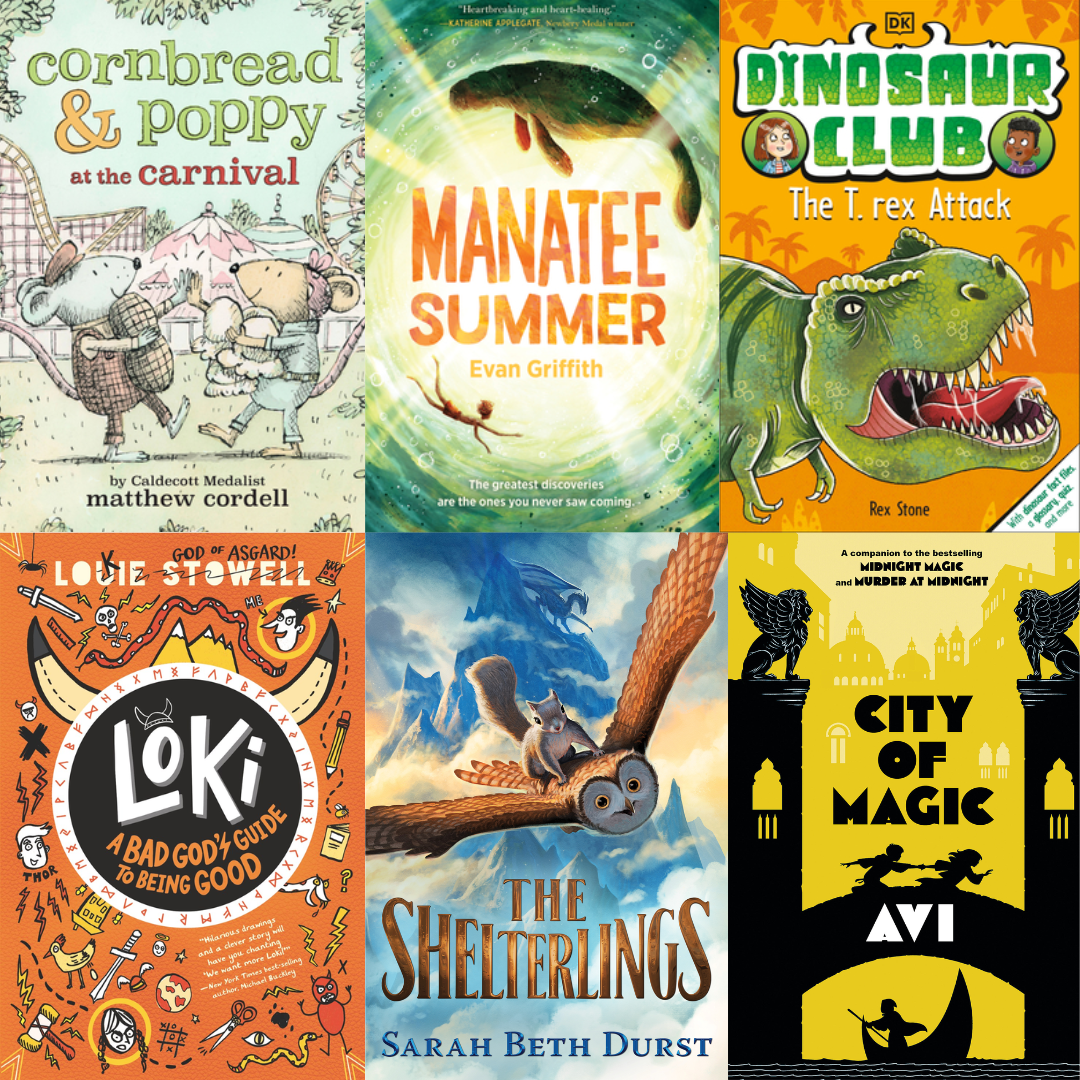 DINOSAUR CLUB: The T-Rex Attack  by Rex Stone.  Jamie and Tess discover a secret cave that lets them travel back to the time of the dinosaurs, where a whole world of adventure awaits them.  Includes dino facts and glossary.  Gr K-3.

CORNBREAD AND POPPY AT THE CARNIVAL by Matthew Cordell.  Best friends Cornbread and Poppy spend a day at the Carnival playing games, eating snacks, and riding the Ferris wheel.  Color illustrations on every page.  Humorous and delightful.  Gr K-2.

THE SHELTERLINGS by Sarah Beth Durst.  Gentle animal fantasy about a group of failed familiars who try to create a potion that will improve their magical powers.  Wonderfully realized characters and positive themes of friendship and the value of self-worth.  Gr 4-6.

THE CITY OF MAGIC by Avi.  In 1492, Mangus the Magician and his thirteen-year-old servant, Fabrizio, are commanded to go to Venice, on pain of death, to find a book by Friar Luca Pacioli which reportedly contains a magical means of making money.   Avi combines a historical fiction setting with action, intrigue, adventure and a true-life historical mathematician.  Gr 5+.

MANATEE SUMMER by Evan Griffith.  Peter and his best friend, Tommy, have a goal for their last summer before middle school: finish their Discovery Journal, a catalog of the wildlife around their Florida town. When they spot a manatee in a canal, Peter knows they've found something special--and when the manatee is injured by a boat, something to protect.  Gr 4-7.

THE LOST RYU by Emi Watanabe Cohen.  Could also be titled The Last Ryu. A combination of historical fiction and fantasy in post-war Japan where (small) dragons are talking pets.  Keihu seems to remember large dragons from the past and thinks that if he can locate one for his grandfather, the family’s troubles will be resolved, and everyone will be happy again.  Japanese phrases and names are used copiously throughout the story. Gr 5-8.

THE ISLANDERS: SEARCH FOR TREASURE by Mary Alice Monroe and Angela May. Another summer of adventure awaits visiting islanders Jake, Macon and Lovie.  Fans of the award-winning Mary Alice Monroe will enjoy introducing her to a younger audience in this middle grade series set on one of the South Carolina barrier islands.  As she and May share, “This story is about a search for treasure. The children discover that the great treasures are not made of gold or silver, but are found in their relationships with family, friends and the natural world.”  Gr 3-7.

LOKI: A BAD GOD’S GUIDE TO BEING GOOD by Louie Stowell.  After one prank too many, trickster god Loki has been banished to live as a kid on Earth. If he can show moral improvement within one month, he'll be allowed to return to Asgard. If not? Eternity in a pit of angry snakes.  Good for fans of Wimpy Kid books, Dog Man stories, and Middle School, the Worst Years of My Life (James Patterson).  Gr 4-7.

THE FIRST RULE OF CLIMATE CLUB BY Carrie Firestone.  For kids who like to change all the unfairness  and problems they see around them, this story follows the Climate Club as they expand their activism into other areas.  Gr 5-8.