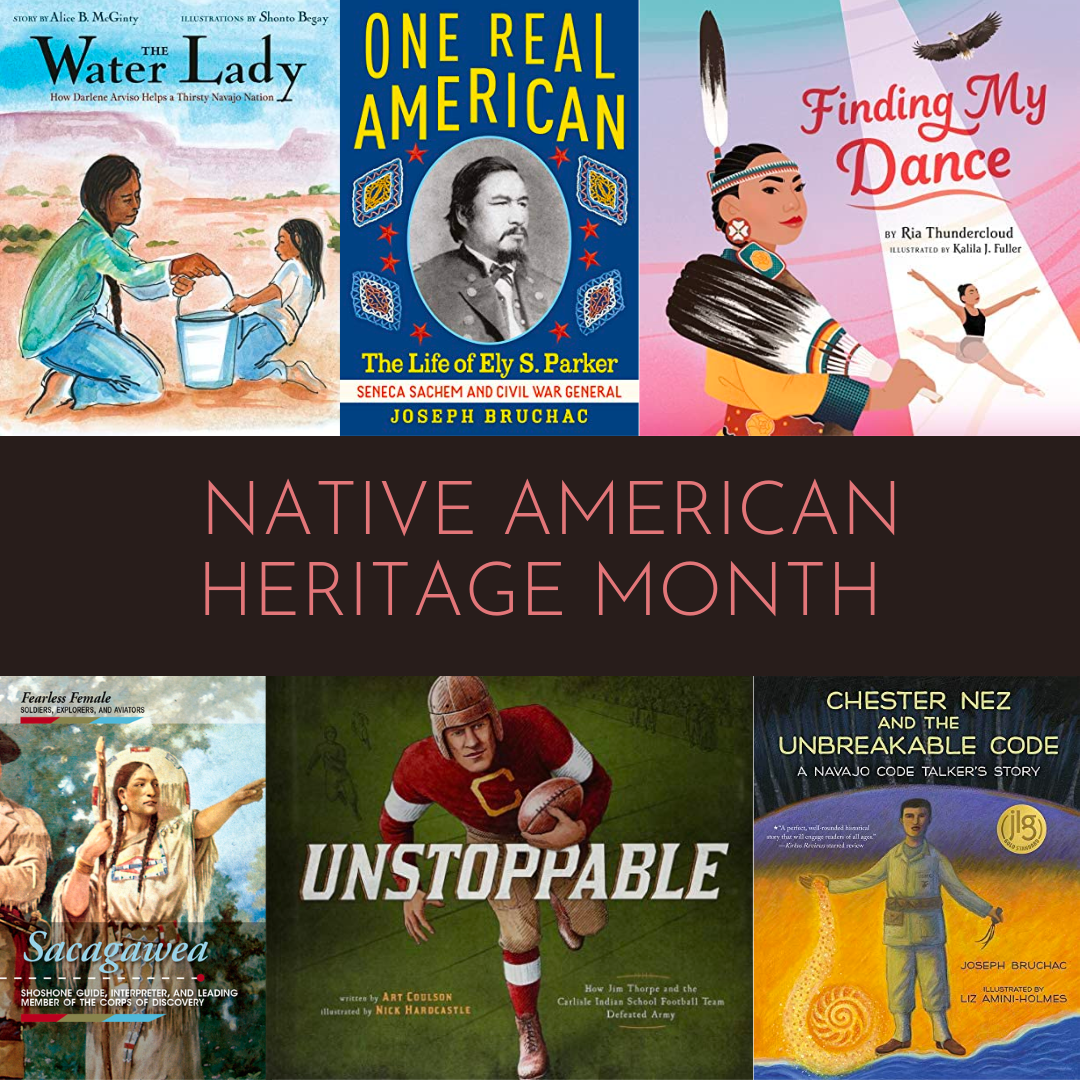 As a young Navajo boy, Chester Nez had to leave the reservation and attend boarding school, where he was taught that his native language and culture were useless. But Chester refused to give up his heritage. Years later, during World War II, Chester--and other Navajo men like him--was recruited by the US Marines to use the Navajo language to create an unbreakable military code. Suddenly the language he had been told to forget was needed to fight a war. This powerful picture book biography contains backmatter including a timeline and a portion of the Navajo code, and also depicts the life of an original Navajo code talker while capturing the importance of heritage.

In this action-packed double biography, S. D. Nelson draws fascinating parallels between Crazy Horse and Custer, whose lives were intertwined. These warriors were alike in many ways, yet they often collided in deadly rivalry. Witness reports and reflections by their peers and enemies accompany side-by-side storytelling that offers very different perspectives on the same historical events. The two men's opposing destinies culminated in the infamous Battle of the Greasy Grass, as the Lakota called it, or the Battle of the Little Bighorn, as it was called by the Euro-Americans.

In 2021, Deb Haaland made history as the first Indigenous cabinet secretary. Serving as Secretary of the Interior, Haaland has championed climate and the rights of Native peoples. Discover Haaland's early life, her political career, and more.

Finding My Dance by Ria Thundercloud

In her debut picture book, professional Indigenous dancer Ria Thundercloud tells the true story of her path to dance and how it helped her take pride in her Native American heritage.

Maria Tallchief loved to dance, but was told that she might need to change her Osage name to one that sounded more Russian to make it as a professional ballerina. She refused, and worked hard at dancing her best, becoming America's first prima ballerina. Many famous American ballets were created for Maria!

Ely S. Parker (1828-1895) is one of the most unique but little-known figures in US history. A member of the Seneca (Iroquois) Nation, Parker was an attorney, engineer, and tribal diplomat. Raised on a reservation but schooled at a Catholic institution, he learned English at a young age and became an interpreter for his people. During the American Civil War, he was commissioned as a lieutenant colonel and was the primary draftsman of the terms of the Confederate surrender at Appomattox. He eventually became President Grant's Commissioner of Indian Affairs, the first Native American to hold that post. Award-winning children's book author and Native American scholar Joseph Bruchac provides an expertly researched, intimate look at a man who achieved great success in two worlds yet was caught between them. Includes archival photos, maps, endnotes, bibliography, and timeline.

Red Cloud: A Lakota Story of War and Surrender by S.D. Nelson

A leader among the Lakota during the 1860s, Chief Red Cloud deeply opposed white expansion into Native American territory. He rejected treaties from the United States government and instead united the warriors of the Lakota and nearby tribes, becoming the only Native American to win a war against the U.S. Army. Despite his military successes, Red Cloud recognized that continued conflict would only bring destruction to his people. He made the controversial decision to make an agreement with the U.S. government and moved his people to a reservation. The effects of his decision -- as well as the conflicts that arose from those who rejected the agreement and continued fighting against white expansion, such as Crazy Horse and Sitting Bull -- shaped much of the history of Native American relations with the U.S. in years to come.

Sacagawea : Shoshone Guide, Interpreter, and Leading Member of the Corps of Discovery

One of the most recognized names of America's westward expansion is Sacagawea, yet her contribution to history is much more than that represented in fictional accounts. Sacagawea was an integral part of the Lewis and Clark expedition and leading member of the Corps of Discovery. This book examines the extraordinary life and times of Sacagawea, her accomplishments, adventures, and impact on the shape of America.

The most renowned Native American Indian potter of her time, Maria Povika Martinez learned pottery as a child under the guiding hands of her ko-ōo, her aunt. She grew up to discover a new firing technique that turned her pots black and shiny, and made them--and Maria--famous. This inspiring story of family and creativity illuminates how Maria's belief in sharing her love of clay brought success and joy from her New Mexico Pueblo to people all across the country.

This acclaimed picture book autobiography tells the triumphant story of Sharice Davids, one of the first Native American women elected to Congress, and the first LGBTQ congressperson to represent Kansas. When Sharice Davids was young, she never thought she'd be in Congress. And she never thought she'd be one of the first Native American women in Congress. During her campaign, she heard from a lot of doubters. They said she couldn't win because of how she looked, who she loved, and where she came from. But everyone's path looks different and everyone's path has obstacles. And this is the remarkable story of Sharice Davids' path to Congress.

Tecumseh: Get to Know the Shawnee Chief Who Fought to Protect Native Lands by John Micklos Jr.

Shawnee leader Tecumseh was born at a time when white settlers were moving westward across the United States and making their homes on Native American lands. Tecumseh rallied the Native American people to defend their lands. But he also dreamed of peace and worked to unite all Native Americans into a single confederacy. He did not live to see his dream become a reality, but his deeds as a warrior and statesman live on.