Poets and Writers of Antiquity 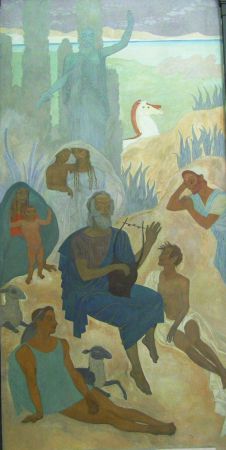 Nicolai Remisoff was born in St. Petersburg, Russia in 1887 and died in Palm Springs in 1975. He was a theatrical designer, painter, muralist, and architectural consultant. Remisoff's artistic style, which has been termed "Russian Vogue," had significant impact on the fashionable theaters and magazines of the 1920s.

A son of actors in the Russian Imperial Theater in St. Petersburg, Remisoff entered the Imperial Academy of Fine Arts in 1910. After the Bolshevik revolution in 1917, Remisoff was to be put on trial as a dissident, so he fled with his family to Ukraine. The family moved to Paris in 1921 and on to New York in 1922. In New York, his work expanded beyond the theatre and his commissions to designing covers and illustrated articles for publications, including Vanity Fair, House & Garden, and Vogue. Remisoff also illustrated advertisements for a variety of publications, designed the cover of one of Anna Pavlova's dance programs, and exhibited and sold his drawings at the Wildenstein Gallery where he had a one-man show in 1922. During his time in New York, he decorated the second floor Grand Salon of New York's Elizabeth Arden Red Door Salon & Spa in 1929; a commission that launched a partnership that would continue until Arden's death in 1966. During this time Remisoff would design fashionable Arden salons in New York, Chicago, San Francisco, and Hollywood.

In 1925, Remisoff moved to Chicago, remaining here until 1935. Most of Remisoff's Chicago years were devoted to designing sets and costumes for the Adolph Bolm and Ruth Page Ballet companies. During the years of his Chicago residence, Remisoff designed more than 20 ballets. Remisoff also created sets for the Chicago Grand Opera. His designs for Strauss' Salome were among his most popular.

During his time in Chicago painted circus stage scenes for a plaster balcony in the Woman's Athletic Club ballroom in Chicago which, according to Celia Hilliard, was replaced by a wrought iron balcony in the 1940s. He also painted murals at Alfred E. Hamill's Centaurs estate located in Lake Forest and designed by David Adler. Remisoff also continued to work as a fine artist, producing paintings on Russian themes for sale and exhibition. He had exhibitions at the Arts Club of Chicago (1925), the Laura Davidson Sears Academy of Fine Arts (ca. 1926), the Art Institute of Chicago (ca. 1926), and the Century of Progress Exhibition (1933).

In addition to the artistic works and projects mentioned above, Remisoff consulted on architectural projects. These included commissions for the General Motors Cadillac Salons; the Sears Roebuck building (a part of the Chicago World's Fair); and designs for the Punch and Judy Theater and the New Palace Theater. Remisoff also worked as a graphic artist, illustrating covers for the Marshall Field & Co. catalogs and creating advertisements for other companies, including luxury car manufacturers Cadillac and Murray Corporation in Detroit.

In the summer of 1939 Remisoff began work on his first motion picture as art director for Lewis Milestone's production, Of Mice and Men. The success of Of Mice and Men helped to establish Remisoff in the movie industry. Before his career was finished, Remisoff acted as art director or production designer for 31 movies, including Topper Returns (1941), The Red Pony (1949), Apache (1954) and four television series including Gunsmoke and Have Gun - Will Travel. Remisoff retired from the film industry in 1960 with the completion of Ocean's Eleven.

The eight large-scale panels of the Art Deco mural present a panorama of the classical heritage of literature. Each panel is "framed" by a pilaster, accenting the classical motif. Starting to the left of the Circulation Desk and moving counter-clockwise:

A 1932 article in the Evening American refers to the "Byzantine" features and exhorts, "Frankly, it is well worth a run to the swank North Shore village to see." The murals were cleaned and retouched in 1955–1956, and restored by the Chicago Conservation Center in 1997 (funded by Friends of Lake Forest Library, in honor of former Friends' president Frank Kreuz).

The murals are the last remaining Remisoff artwork available for public viewing anywhere in Chicagoland. They were featured in WTTW's Ask Geoffrey http://chicagotonight.wttw.com/2015/09/16/ask-geoffrey