Books You Need to Read this Fall 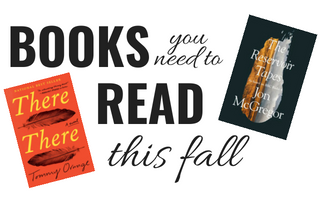 There There by Tommy Orange | Fiction Tells the story of twelve characters, each of whom have private reasons for traveling to the Big Oakland Powwow. There will be glorious communion, and a spectacle of sacred tradition and pageantry. And there will be sacrifice, and heroism, and unspeakable loss.

The Great Believers by Rebecca Makkai | Fiction A novel of friendship and redemption in the face of tragedy and loss set during the 1980s AIDS Crisis in Chicago and in contemporary Paris.

My Year of Rest and Relaxation by Ottessa Moshfegh | Fiction A shocking, hilarious and strangely tender novel about a young woman’s experiment in narcotic hibernation, aided and abetted by one of the worst psychiatrists in the annals of literature.

Brother by David Chariandy | Fiction Brother explores questions of masculinity, family, race, and identity as they are played out in a Scarborough housing complex during the sweltering heat and simmering violence of the summer of 1991.

Reservoir Tapes by Jon McGragor | Fiction A teenage girl has gone missing from a small English village. The whole community has been called upon to join the search. And now an interviewer arrives, intent on capturing the community’s unstable stories about life in the weeks and months before Becky Shaw vanished.

The Incendiaries by R.O. Kwon | Fiction A powerful, darkly glittering novel of violence, love, faith, and loss, as a young woman at an elite American university is drawn into acts of domestic terrorism by a cult tied to North Korea.

The Air You Breathe by Frances de Pontes Peebles | Fiction The story of an intense female friendship fueled by affection, envy and pride--and each woman's fear that she would be nothing without the other.

Lake Success by Gary Shteyngart | Fiction When his dream of the perfect marriage, the perfect son, and the perfect life implodes, a Wall Street millionaire takes a cross-country bus trip in search of his college sweetheart and ideals of youth in the long-awaited novel.

Sea Prayer by Khaled Hosseini | Fiction Composed in the form of a letter, from a father to his son, on the eve of their journey. The father reflects on the dangerous sea-crossing that lies before them. It is also a vivid portrait of their life in Homs, Syria, before the war, and of that city's transformation from a home into a deadly war zone.

Transcription by Kate Atkinson | Fiction Publish Date: 9/25/18. In WWII era London, Juliet Armstrong is working as an espionage monitor for MI5. Ten years later she suddenly finds herself targeted by dangerous individuals from her past. For fans of smart, witty, suspenseful, historical or spy fiction and authors like Tana French, Laurie R. King, and John Le Carre.

Pieces of Her by Karin Slaughter | Mystery What if the person you thought you knew best turns out to be someone you never knew at all? When a trip to the mall explodes into violence, Andrea suddenly sees a completely different side to her mother Laura. Because it turns out that before Laura was Laura, she was someone completely different.

Macbeth by Jo Nesbo | Mystery Macbeth is a re-telling by Jo Nesbø of the original play, Macbeth, by William Shakespeare. This crime thriller is set in Scotland in the 1970’s for a more modern audience. This is part of the Hogarth Shakespeare project.

The Banker's Wife by Cristina Alger | Fiction While bound for Geneva, a private jet drops off the radar. In this fast paced thriller, three woman are drawn into a world of international riches and financial crimes: money laundering, tax evasion and international finance.

A Double Life by Flynn Berry | Fiction A young woman investigates a crime that changed her life.  As a young child her mother was brutally murdered and her father disappeared. As an adult, she decides to find out the truth about her family, who was responsible for this horrible crime. Does she really want to know the answer?

Lethal White by Robert Galbraith | Mystery Publish Date: 9/18/18. When Billy, a troubled young man, comes to private eye Cormoran Strike’s office to ask for his help investigating a crime he thinks he witnessed as a child, Strike is left deeply unsettled. While Billy is obviously mentally distressed, and cannot remember many concrete details, there is something sincere about him and his story. But before Strike can question him further, Billy bolts from his office in a panic.

Indianapolis: The True Story of the Worst Sea Disaster in U.S. Naval History and the Fifty-Year Fight to Exonerate an Innocent Man by Lynn Vincent | 940.5426 VIN A sweeping saga of survival, sacrifice, justice, and love, Indianapolis stands as both groundbreaking naval history and spellbinding narrative—and brings the ship and her heroic crew back to full, vivid, unforgettable life.

Beauty in the Broken Places: A Memoir of Love, Faith and Resilience by Alison Pataki | 616.81 PAT  The author of A Traitor’s Wife, The Accidental Empress Pataki shares with readers the journey that begins with her husbands life-threatening strokes and takes us through their life changing moments and the strength that they share.

Rocket Men: The Daring Odyssey of Apollo 8 and the Astronauts Who Made Man's First Journey to the Moon by Robert Kurson | 629.45 KUR The author of Shadow divers, Kurson’s novelistic approach to the story captures the suspence of the mission and the love of the families for these adventurers.

Iris Apfel: Accidental Icon: Musings of a Geriatric Starlet by Iris Apfel | 391 APFEL A lavishly illustrated collection of musings, anecdotes, and observations on all matter of life and style, infused with the singular candor, wit, and exuberance of the globally revered ninety-six-yea-old fashion icon whose work has been celebrated at the Metropolitan Museum of Art's Costume Institute and by countless fans worldwide.

My Twenty-Five Years in Provence by Peter Mayle | 944.9 MAY The beloved author of all things Provence, here in a final volume of all new writing, offers recollections from his 25 years in the South of France-- lessons learned, culinary delights enjoyed, and changes observed.

Leadership in Turbulent Times by Doris Kearns Goodwin Publish Date: 9/18/18. Goodwin draws upon the four presidents she has studied most closely—Abraham Lincoln, Theodore Roosevelt, Franklin D. Roosevelt, and Lyndon B. Johnson (in civil rights)—to show how they recognized leadership qualities within themselves and were recognized as leaders by others.

In Pieces by Sally Field Publish Date: 9/18/18. In this memoir, Field's tells her story for the first time--about a challenging and lonely childhood, the craft that helped her find her voice, and a powerful emotional legacy that shaped her journey as a daughter and a mother.